This underperformance in new commercial jet fuel efficiency means the technology advances needed to meet ICAO’s own targets have not occurred, T&E warned. It compared the 1.1% annual efficiency gain to industry trade body IATA’s forecast of 4.1% annual growth in demand for air connectivity for the next 20 years.

ICAO only agreed to develop a fuel efficiency standard for new aircraft in 2009 and is set to complete it in 2016, three years behind schedule. The standard should take effect in 2020. Decisions on the actual stringency of the standard are due in the coming months.

Andrew Murphy, aviation officer at T&E, said: ‘When demand for your service grows four times quicker than your operational efficiency, you clearly have an emissions gap. This study confirms the open secret that planemakers are not delivering the efficient airplanes needed to meet UN goals. ICAO must help airlines meet their own climate goals and agree a CO2 standard that actually forces new technology in the fleet, rather than doing business as usual.’

As the rate of fuel efficiency gains varied over time, the changes strongly correlated with fuel prices. Spikes in kerosene prices in the early 1980s and after 2004 often coincided with improvements in average fuel burn due do better fuel efficiency in new planes (see graph). Average fuel burn improved 2.6% a year in the 1980s. No progress was seen during the 1970s and in the period from 1995 to 2005. 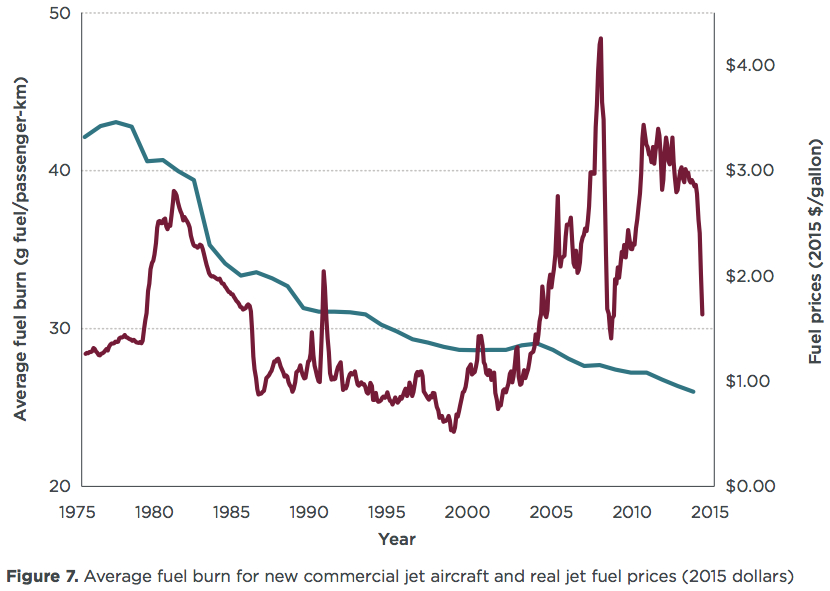 Andrew Murphy added: ‘History has shown again and again that fuel efficiency in transport is highly linked to fuel costs. Air travel is no different. It’s a no brainer for ICAO to agree a global market-based measure that drives fuel prices up steadily over time.

‘With new aircraft having a lifespan of 20-30 years, falling efficiency returns could lock in unnecessary fossil fuel consumption for decades to come, greatly undermining global efforts to decarbonise and limit a temperature increase to under 2 degrees.’

Aviation is the most carbon-intensive transport mode, responsible for about 5% of man-made climate change. If aviation were a country it would be ranked 7th in the world for CO2 emissions – between Germany and Korea. EU aviation emissions, a third of global totals, have doubled since 1990 and will triple by 2050 if unchecked.