To meet UK and EU CO2 targets for cars, manufacturers have ramped up the production of electric cars. They now account for one in seven new cars sold. But the targets for vans are so weak, just one in 60 vans sold in the UK is electric. Data obtained by T&E forecast only a fifth of vans made in Europe in 2030 will be electric – far short of the phase-out goal the government has announced. 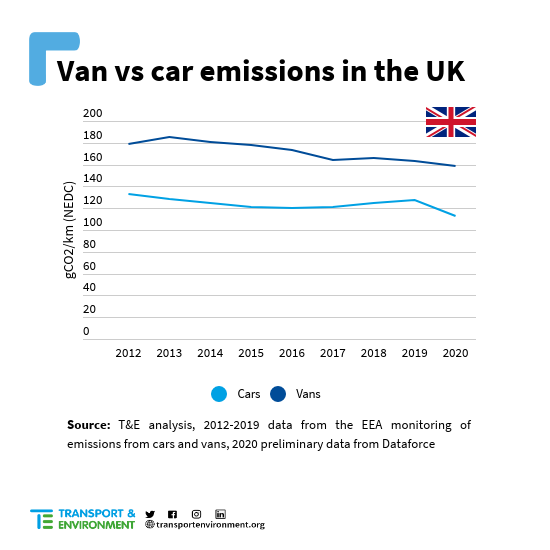 Greg Archer, UK Director at Transport & Environment, said: “While regulations and incentives to buy electric cars are driving up sales, 98% of new vans are still diesels. If vanmakers have their way, four-fifths of vans made and sold in Europe will still be diesels by 2030. The automotive industry is forcing businesses to buy dirty diesel engines they can no longer sell in cars by restricting availability of clean electric van models.”

With e-commerce booming, new van sales in the UK leapt by 43% between 2012 and 2019, and van emissions now account for 17% of all the CO2 from vehicles. New UK van standards that were introduced at the start of 2021 were supposed to make vans cleaner, but vanmakers have had to do almost nothing to reach them. Diesel car sales have slumped to just one in 10 new cars creating a massive oversupply of diesel parts and engines.

Greg Archer concluded: “Electric vans already make business sense with lower total costs of ownership. By 2026 the price of an electric van should be less than the diesel equivalent. With the forthcoming Transport Decarbonisation Plan, the government must lay out clear plans on how it intends to achieve the phase out of diesel vans by 2030 including regulating auto companies to increase sales of electric vans.”