The EU’s proposals to bring shipping into the bloc’s carbon market (ETS) contain exemptions that leave millions of tonnes of CO2 unregulated, a T&E study reported in Reuters shows.

Exemptions for small commercial vessels under a certain size and for specific non-cargo vessels such as military and luxury yachts, and those servicing offshore energy mean that some 25.8 million tonnes of CO2 would not fall under the ETS. This is roughly 17% of total EU shipping emissions.

Many of these exempted ships are heavily polluting. Those servicing offshore energy, for example, emit more on average than bulk carriers and oil tankers. This is due to the regularity and intensity of their use. Smaller cargo ships, for example, may spend a lot more time at port.

Jacob Armstrong, sustainable shipping officer at T&E, said: “It’s good that the EU is finally trying to address shipping’s appalling climate impact. But its proposal based on arbitrary loopholes lets too many heavily polluting vessels off the hook. The EU must rethink its shipping laws to ensure that millions of tonnes of CO2 don’t go unregulated.” 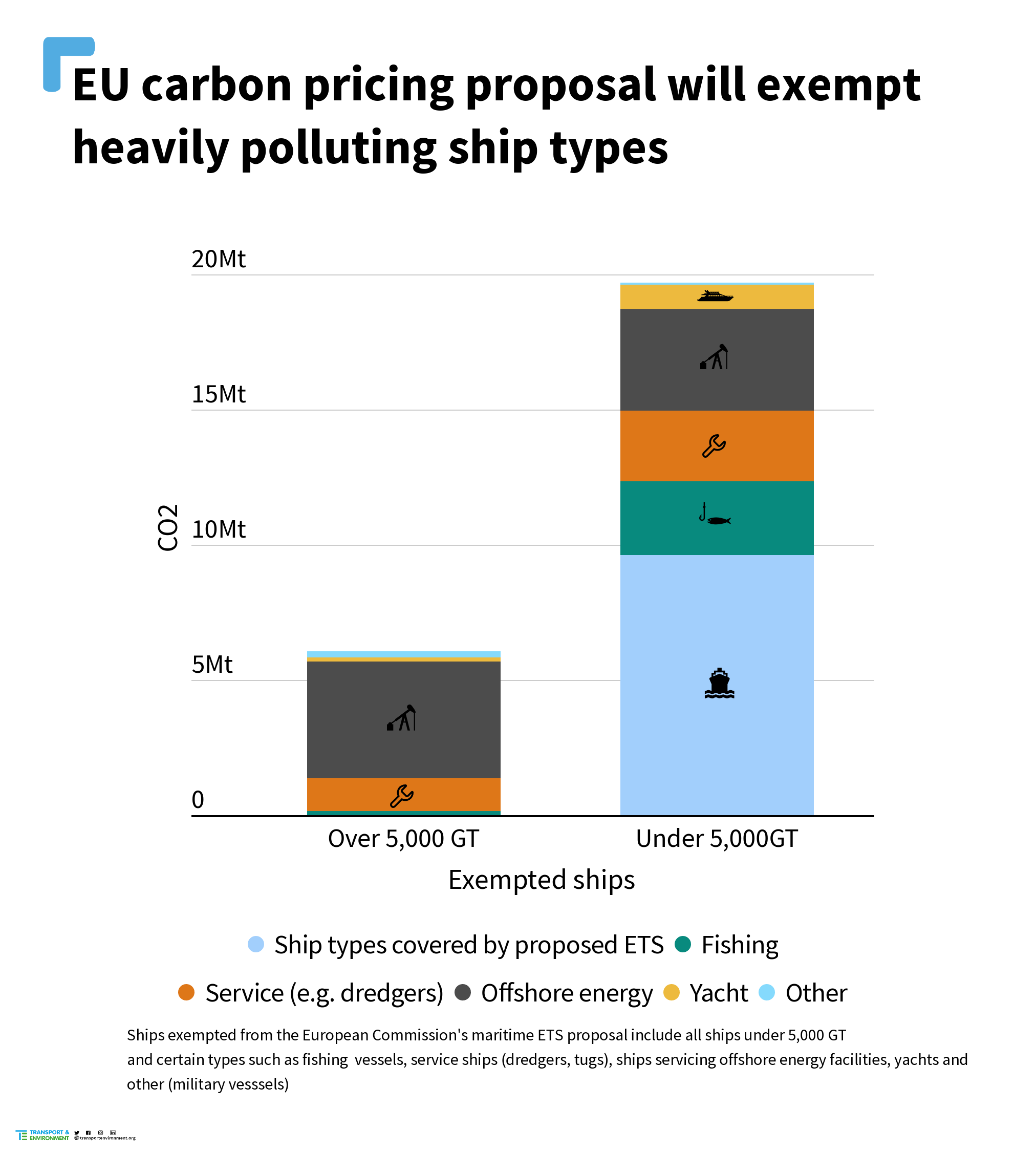 The European Commission claims that the size threshold and exemptions aim to minimise the administrative burden for companies, while still covering the majority of emissions.

However, T&E proposes an approach that covers only ships that pollute over a certain amount – rather than solely based on size and type. This would regulate more emissions without putting an administrative burden on small businesses. T&E recommends lowering the size threshold from 5,000GT to 400GT and applying a carbon threshold of 1,000 tonnes of CO2 per year, which would cover 12% more emissions than the current proposal.

Following the launch of the report, EU lawmaker Peter Liese said the European Parliament would look at the issue ahead of negotiations on the policy.

T&E also published a briefing looking into the debate on who should be responsible for the carbon price between shipowners and charterers – those who rent ships from the owners. The paper demonstrated the legality of a ‘contractual arrangement’ clause within the ETS, to address concerns from shipowners that they would not be able to pass costs on.

The approach was adopted by Liese and supported by industry lobby group, ECSA. Although some parts of the shipping industry remain opposed to the contractual arrangement approach, the NGO-industry alliance on this issue has so far been successful in convincing policymakers.

With about 80% of world trade transported by sea, global shipping accounts for nearly 3% of the world’s CO2 emissions. Emissions from the sector continue to grow. According to a report published this month by analyst firm Simpson Spence & Young, emissions from global shipping increased by 4.9% in 2021, greater than in 2019 before the global economy ground to a halt. Governments, international bodies and the industry must do more now to clean up the sector, says T&E.