Last week the US EPA – the equivalent of the European Commission’s environment directorate – announced a second set of heavy-truck fuel economy and CO2 standards. The headline target is to reduce the fuel use of new long-haul trucks by around 30-45%, compared to 2010. The new American standard is a challenge to Europe’s truck supremacy in several ways.

First of all it means that, from the early 2020s at the latest, the most fuel-efficient trucks will no longer be sold in Europe, but in the US. Currently new European tractor-trailers average around 34.5l/100km. The Commission expects improvements of 0.5 to 1% per year although this is probably optimistic given that EU trucks have barely become more efficient since the mid-1990s and the EU does not currently have plans to regulate truck fuel efficiency.

In the US, tractor-trailers average around between 33-36l/100km today. The new US proposal is going to bring that down to below 27l/100km by 2027. This means US trucks will overtake European lorries as the most efficient in the world from the early 2020s (as shown in the graph below). For Europe’s hauliers, this means they’re about to miss out on very substantial fuel savings. Indeed, the EPA estimates its new standards will save American transport businesses €150 billion. 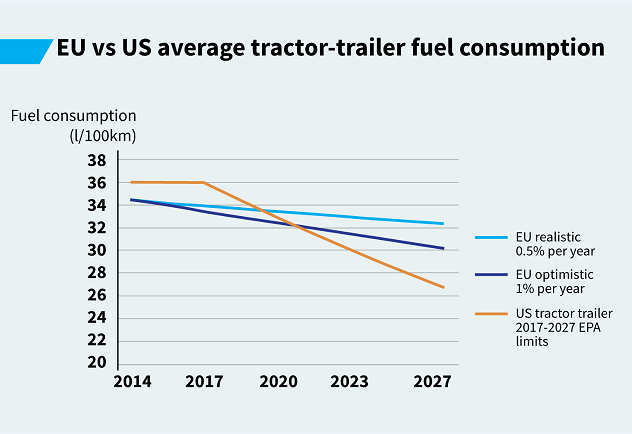 The second big challenge is technology leadership. Achieving the 2027 target will require fitting a number of technologies that are not currently standard in the US or Europe. The standards will create a big market for technologies like waste heat recovery – a system which, among other things, was developed by Bosch – but also for better tires, more efficient transmission and hybrid engines. Unless Europe acts, Daimler and Volvo will soon be selling more advanced technology across the pond than on the old continent.

A third big challenge is on regulatory leadership. When the EU embarked on the development of a European test procedure for trucks in 2011, one key reason was that European original equipment manufacturer Volvo wanted to create a system that could be copied all over the world – similar to the Euro standards. That would make it easier to sell European trucks in places like China and help avoid having other regions set engine standards. Daimler and Volvo hate the separate engine efficiency standard the US has introduced in phase I and II.

But four years on, Europe is still – slowly – developing a truck CO2 test procedure called VECTO. A first phase is set to be proposed in 2016 but it will only cover a certain number of vehicle categories and won’t include trailers or advanced powertrains. Clearly the EU doesn’t expect these to hit the market any time soon. Meanwhile the US has had four years of regulatory experience. The phase II proposal includes trailers and the test procedures have been updated to accommodate things like waste heat recovery, hybrid engines and alternative powertrains such as LNG/CNG. That’s because the US EPA expects the new standard will force the uptake of these advanced technologies.

In many developing economies like China and India, trucks are the dominant source of surface transport emissions. For them, the US regulatory framework is going to look a lot more attractive than what we’ve come up with in Europe so far.

So in conclusion, the ‘inefficient Americans’ are hot on our heels and unless the European Commission finally starts taking trucks a lot more seriously, we’ll be hearing jokes about Europe’s old-fashioned, brick-shaped gas-guzzlers in a few years’ time. That’s not just bad for our self-esteem; it’s also bad news for EU member states that just signed up to 2030 energy and climate legislation that requires them to cut road transport and truck emissions, and for our economy which will be missing out on billions in fuel savings and new employment opportunities. Commissioner Cañete and his colleagues have got their work cut out.