These are the shocking findings from new data from OILWORLD, the industry’s reference for vegetable oils markets, released today by biofuels watchdog Transport & Environment. Palm oil is known to be an important driver of the destruction of rainforests and wildlife [1].

Laura Buffet, energy director at T&E, said: “This is a decade-long trend that gets worse every year. It patently shows that the imported deforestation from consuming palm oil in Europe is mainly driven by the biofuels policy.” 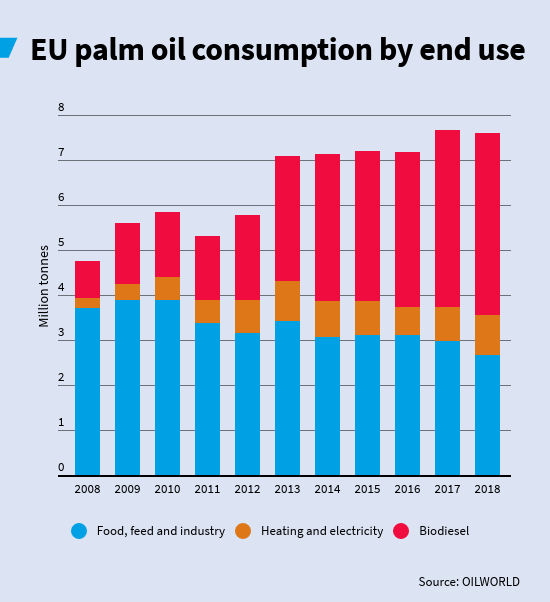 Overall, the EU used over 4 million tonnes of crude palm oil to make biodiesel in European biorefineries in 2018. But the bloc imported an additional 1.2 million tonnes of palm oil biodiesel refined outside the EU. Following the lifting of anti-dumping duties on Indonesian palm oil diesel and Argentine soy diesel, imports of refined biodiesel tripled from 2017 to 2018 – with palm oil and soy accounting for around 86% of all biodiesel imports.

The data also reveals that the EU spent €4.2 billion in 2018 to import two of the main drivers of deforestation, while EU institutions spend €3.4 billion over six years to protect nature.[2]

In a landmark decision last month, the EU labelled the use of palm oil for energy as unsustainable (with some disputable exceptions) and is set to phase it out by 2030, starting in 2023. A coalition of 18 NGOs across nine European countries, including T&E, campaigned hard to have the phase-out in place. The EU has also made it clear that countries are no longer obliged to use food based biofuels after 2021 to meet the bloc’s climate targets. Member states are now drafting laws to implement the Renewable Energy Directive II and can phase out food-based biofuels as soon as 2021.

Laura Buffet said: “National ministers need to stop the madness of burning food in cars and trucks. All vegetable oils have a substitution link with palm oil, and therefore are indirectly associated with rainforest destruction. We urge EU governments to, at the very least, phase out palm oil and all vegetable oil based biofuels starting in 2021.”