Airlines’ carbon emissions grew 4.9% on flights within Europe last year – in contrast to the other sectors covered by emissions-trading, such as coal and cement plants, which declined 3.9% overall. Carbon pollution from flying in Europe has risen a staggering 26% in the last five years – far outpacing any other transport mode.

T&E said the top 10 growing polluters show that aviation’s runaway emissions are a problem for the whole airline sector, which governments have left untaxed and under-regulated compared to other transport modes. Emissions from flights within Europe account for only 40% of the problem – the remaining 60% comes from flights to destinations outside Europe and these are entirely unregulated. 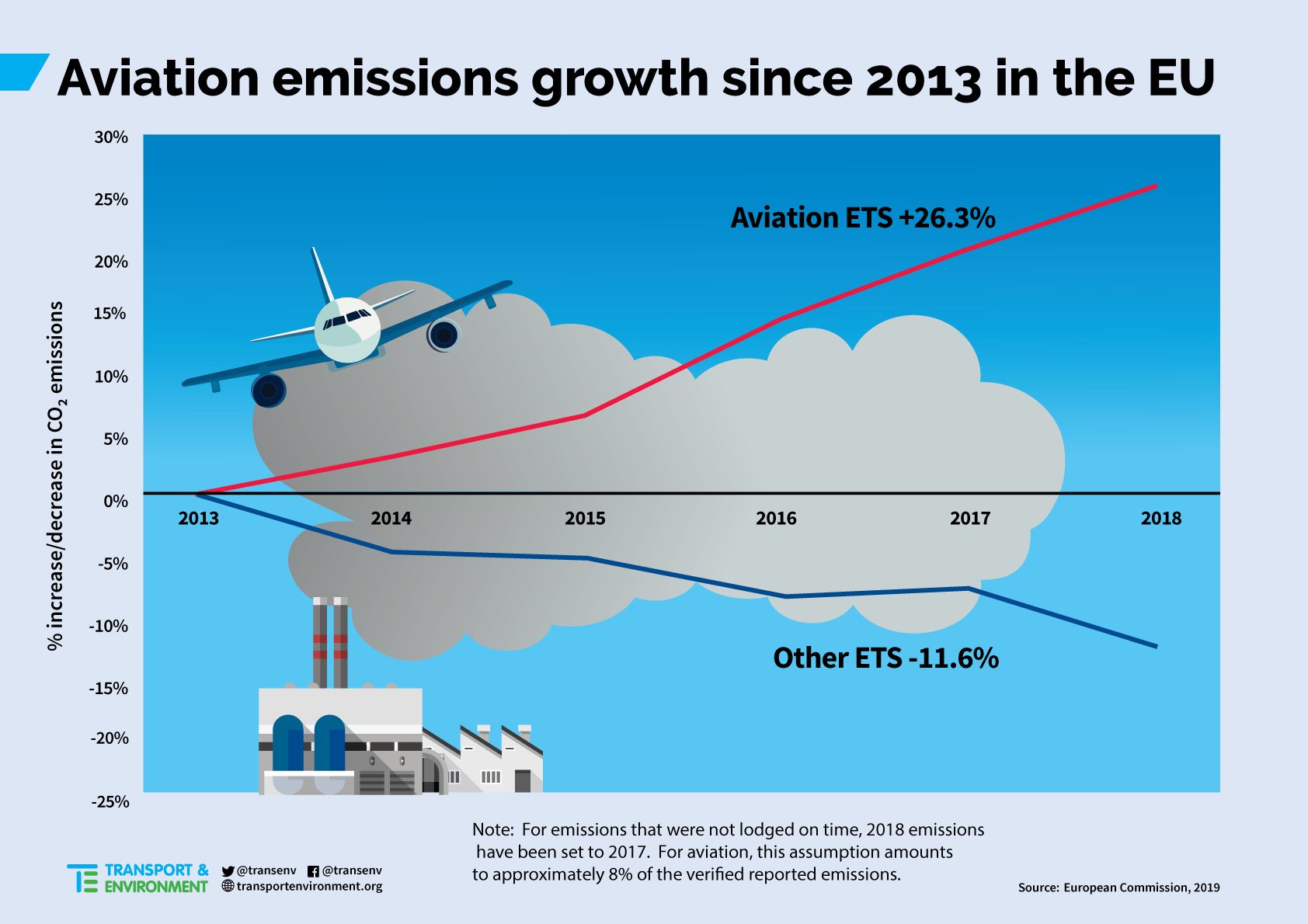 The aviation sector’s pollution is growing so fast that Ryanair is now one of the top 10 carbon emitters within Europe, a league which had until now been exclusively occupied by coal plants.

Andrew Murphy, aviation manager at T&E, said: ‘When it comes to climate, Ryanair is the new coal. This trend will only continue until Europe realises that this untaxed and under-regulated sector needs to be brought into line, starting with a tax on kerosene and the introduction of mandates that force airlines to switch to zero-emission jet fuel.’

T&E said airlines should have their free emissions allowances in the EU emissions trading system removed, start paying tax on their kerosene, and be subject to VAT on their tickets – like all other transport sectors. Radically cutting aviation emissions would also require a shift to synthetic kerosene, produced from renewable electricity and carbon captured from the air.

Rather than taxing and regulating aviation emissions, governments are pursuing a controversial UN offsetting scheme for aviation, known as Corsia, which will allow aviation emissions to continue growing. There are serious doubts over the environmental effectiveness of carbon offsets. Airlines can emit even more carbon by buying ultra-cheap offsets – where they invest in environmental projects, such as a hydrodam project which later collapsed, instead of reducing their own carbon footprint.

Andrew Murphy concluded: ‘Aviation is Europe’s biggest climate failure. The worst thing we can do in response is to put all our hopes in an offsetting scheme that gives airlines a license to grow indefinitely. But that is exactly what airlines have cooked up at the industry-dominated UN aviation agency. The time has come for a big change in Europe’s aviation policy.’

However, while governments are failing to regulate airlines and their pollution, citizens are taking matter into their own hands. In Sweden a public campaign for people to fly less appears to be having a significant impact on air travel. The company which operates 10 Swedish airports has seen year-on-year passenger numbers drop for seven months in a row. In 2018, Sweden had its weakest overall growth in passenger numbers in a decade. Meanwhile, passenger numbers at the state train operator increased to a record 32 million last year.