In a packed press room, 22-year-old footballing superstar Kylian Mbappe had his very own Marie Antoinette moment for the climate crisis age. Asked why his Paris Saint-Germain team were flying to their midweek game against Nantes – a mere 2 hours away by train – Mr Mbappe burst out laughing. He may as well have said “let them eat cake”. He was not ashamed; he was proud. Was this the pinnacle of environmental injustice?

Of course, Mr Mbappe is just a young man living out his dream. In a world where ostentatious shows of wealth are glamourised on social media, he is also not alone. Taylor Swift, Kylie Jenner, Elon Musk. They are all at it.

For a long time stars have been getting away with it. But in the summer of 2022 something changed. @CelebJets, an automated Twitter account that tracks flights, began to expose celebrities’ private jet use. Kylie Jenner, the reality TV star, was branded a climate criminal after the site showed her private jet taking a flight of just 17 minutes in July.

In a boiling hot summer, these private flights – 10 times more polluting than commercial flights, according to T&E’s analysis in 2021 – had become unpalatable. The story was everywhere. 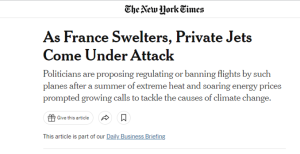 From Le Monde to the New York Times, T&E’s study was cited around the globe. An outraged public called for bans on private jets.

But behind all the headlines hid a deeper debate. An outright ban – promoted by many – is unrealistic in the world we live in today. But what if private jets could be used as a testing ground for green aviation? Electric planes are ideal for short island hopping and intercity trips – which seems to be what the mega rich use them for – while the super rich are well heeled enough to invest early in green aviation fuels like e-kerosene which are currently expensive.

Why not apply a ticket and fuel tax on all private flights departing from Europe? The money raised could then be used to fund greener alternatives and by 2030 only green private jets should be allowed in the sky. T&E calculated that two such taxes in France could raise €660 million by 2030.

In Italy, a tax has existed since 2012. The Luxury Taxis levied on passengers arriving at and departing from an Italian airport on board an executive air charter flight. Passengers pay €10 for legs of less than 100km, €100 for a distance below 1,500km and €200 for any longer trip.  A fair price is up for debate, but the message is clear: you can’t pollute for free like the world isn’t burning.

After this tumultuous summer, the French transport minister has brought this to the European decision-making table. In an upcoming meeting of the EU’s transport ministers, we can expect some colourful exchanges: ban them? Tax them? Keep calm and carry on?

It is easy to bash the rich and famous and it should not detract from the fact that we must fly less and that we must switch to green aviation fuels as soon as possible. But those at the top must lead by example. Otherwise they may find themselves on the wrong side of a revolution.