Global supply chains roared back to life in 2021 as the global economy rebounded. This meant record profits for shipping companies, typified by images in March of the Ever Given ship stuck in the Suez canal causing days of backlogged traffic.

Yet, while those iconic images dominated the headlines, longer lasting changes were happening at the EU policy level. As part of its Fit for 55 climate package, the European Commission announced for the first time that shipping would be included in its carbon market.

Industry recognises the need to pay for its climate impact

In early April, on the eve of the EU’s mammoth set of climate packages, we saw the first signs that the shipping industry was finally acknowledging the need to pay for its climate impact. In a T&E-led letter to the European Commission, Greek and Swedish shipowners, among others, called on the European Commission to put the ‘polluter pays principle’ at the core of its new maritime carbon pricing (ETS).

This was a seismic shift. While Swedish shipowners have been traditionally quite progressive this certainly hadn’t been the case for the Greeks. They were both eventually joined by shipowners from other countries, including Italy, Malta and Cyprus, as well as Norway.

In July T&E exposed the growing carbon emissions from shipping with our ranking showing that Europe’s biggest shipping company, the Mediterranean Shipping Company (MSC), rose to 6th in the ranking of EU carbon emitters. It was evidence that the EU must clean up the industry by making shippers both pay for all their pollution and start using green fuels on European routes.

Later that month, after a successful campaign by T&E, and the support we rallied from shipowners, the EU decided on a maritime carbon pricing which included not only ship emissions within Europe but also half of the emissions from journeys to and from the bloc. 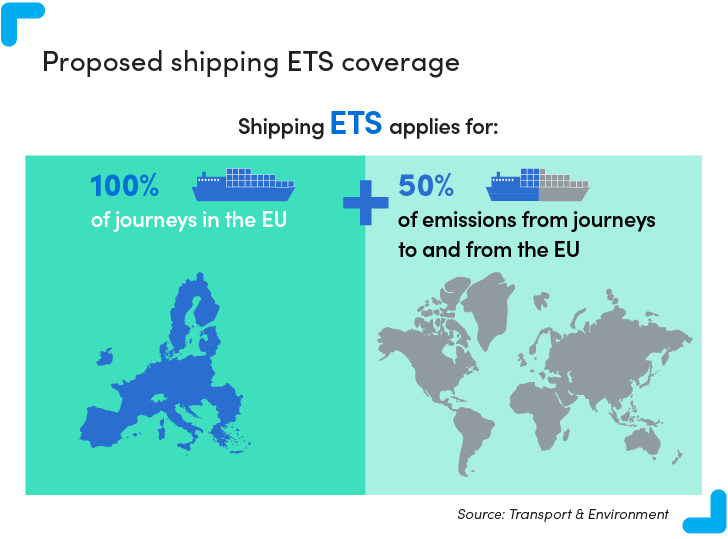 Although the scope could have covered all emissions in and out of the EU, in the messy political world of compromise, this was a pretty good result. For now.

Once the system is fully phased in, under current prices, ships will be required to pay more than €70 for every tonne of CO2 they emit. This will make the world’s dirtiest fuel a third more expensive and incentivise a shift to cleaner alternatives.

A pathway to a clean shipping future

However, pricing emissions can only get you so far.As T&E showed last year, the pathway is clear. Up to a third of emissions could be cut in 2050 through improved efficiency alone. But this will not be enough to decarbonise the sector. If the industry is to cut emissions further it will need to transition to hydrogen-based sustainable fuels. These are currently expensive.

According to T&E’s report, e-fuels could reach up to 7% of the EU shipping fuel mix by 2030 which would give producers the kickstart they need to make enough of the fuels in the coming decades.

Work still to do

Shipping still has an appalling climate record. Continued heavy reliance on the International Maritime Organization (IMO) is leaving the industry aimless at a time where bold targets and policies are vital if we are to decarbonise on time. UN chief António Guterres himself said on the eve of last year’s COP that shipping was on a 3 degree path, not the necessary 1.5ºC.

Despite a  legal paper – commissioned by T&E – showing that contrary to industry claims, shipping and aviation are included in the Paris Agreement, the IMO’s continued avoidance of any strong commitment to reach zero was exasperating.

The climate pays the price for record profits

Container prices continued to rise into 2022, with shipping companies achieving record profits. There has never been a better time to clean up shipping while the sun is shining.