In July the EU announced its plan for 100% of new cars to be zero-emissions by 2035, representing one of the most important wins in T&E’s history. Years in the making, this will help eliminate combustion engine cars and vans which currently make up more than half of the continent’s transport emissions.

We carefully helped prepare the ground, commissioning a YouGov poll which found that almost two-thirds of people in cities supported banning the sale of new petrol and diesel cars in Europe after 2030. We also helped bring together companies from a wide range of industries – such as IKEA Retail, Sky, Uber, Vattenfall and Volvo Cars – to publicly call for the 2035 target.

The UK also announced a landmark target: no new fossil fuelled road vehicles will be sold after 2040, with sales of combustion engine and hybrid cars (2030), vans and smaller diesel trucks phased out by 2035 already – followed by larger diesel trucks in 2040.

The sales boom that started as the EU’s 2020 CO2 emissions rules kicked in, reached new highs in 2021. Almost every fifth car bought in Europe last year had a plug, and half of these were fully electric. Despite the supply chain problems and the chip crisis, electric car sales were five times greater than in 2019 and are reaching a tipping point, proving what T&E always said – with regulation, carmakers will prioritise clean cars.

A year of EV Days

2021 was the year of glossy “EV days” as carmakers boasted their beefed up e-mobility pledges in an attempt to woo investors. Highlights included VW’s pledge to stop selling diesel and petrol engines in Europe by 2035, Renault bringing back its nostalgic R4 as electric, and Daimler making the turn for a better (electric) future away from big polluting hybrids. But despite many promising commitments, T&E has shown that most carmakers still lack a credible plan to get there on time. 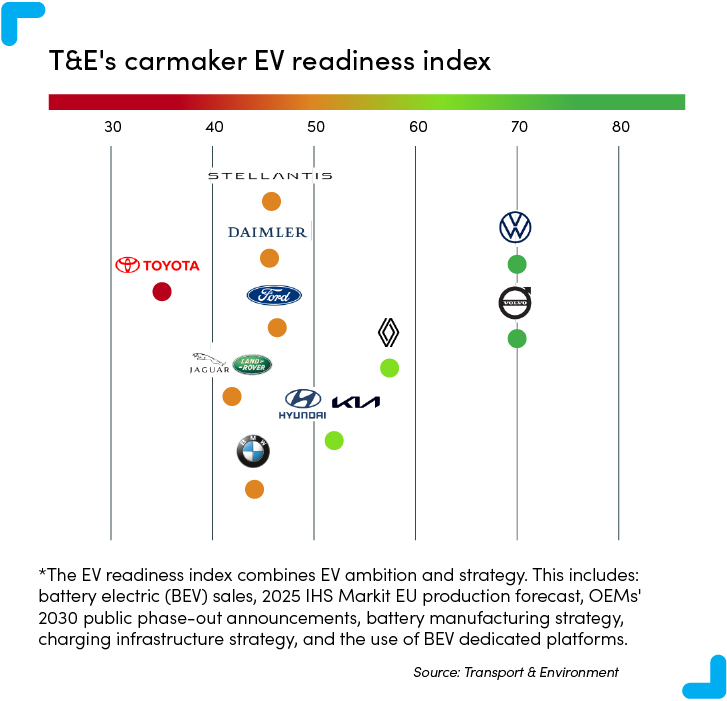 The boom in European battery investments continued in 2021 year, including VW’s plans to build six European battery cell gigafactories by 2030 and Britishvolt in the UK. If all plans are met, T&E estimates that Europe will have a battery cell supply of over 1000 GWh by 2030 – enough to electrify 90% of domestic car sales by 2030.

From words to a credible plan

All this momentum is welcome. But we now need a credible plan to reach all these targets. If we continue ramping up electric vehicle sales as seen in the last two years – via higher 2025 and 2027 car CO2 targets in Europe and ZEV mandates in the UK – an average electric car can be cheaper than a petrol one as early as 2026, a landmark study by BloombergNEF for T&E showed. But the EU proposals only increase ambition after 2030, risking a lost decade on EVs.

In Germany, the most influential country in the EU’s car CO2 debate, T&E made a timely intervention during the coalition government negotiations. An analysis we commissioned from consultancy Prognos showed that an ambitious mix of measures would be needed to achieve the fair and timely decarbonisation of road transport. Chief among these would be electric cars accounting for over 60 percent of new registrations by 2025 and 92 percent by 2030 if the government was to meet its climate target. Ambitious EU car CO2 targets would be central to Germany achieving this, T&E argued.

T&E teams up with the carmakers

Beyond regulations to ramp up EVs in the 2020s, other measures are needed. Starting with a stronger plan on infrastructure – at both EU and national level – to roll out public charge points across EU roads and cities, as well as private ones at home and work. T&E joined forces with Europe’s carmaker association (ACEA) to demand 1 million public chargers by 2024. But it is not just about the numbers: where they are and how fast and easy they allow drivers to charge, or pay, will determine how quickly electric cars go mainstream.

In the UK we carried out a study that identified the ‘postcode lottery’ for electric car charging points. T&E’s interactive map showed the areas with ample infrastructure and the charging deserts that exist in others. The research highlighted ways for Britain’s lawmakers to expand public charging at the pace required.

T&E teams up with Amnesty

A lot of batteries – and minerals to make them – will be needed to electrify cars, vans, trucks and buses. Europe is about to agree on the first ever law globally to ensure battery metals are sourced responsibly, produced with clean energy, and reused and recycled. With the battery investments booming, T&E teamed up with the human rights group Amnesty to call for the law to be agreed urgently and not delayed as some governments want. 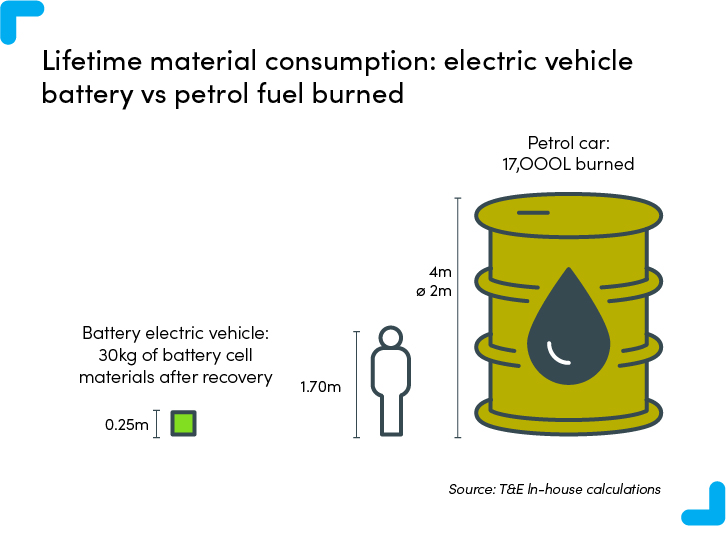 Earlier in the year T&E put into perspective the raw material needs of electric vehicles. While they will require significant raw materials – around 30kg on average – this pales in significance to the 17,000 litres of petrol that are burned in the average car every year.

T&E also turned its attention to another big fight in the year ahead: new air pollution standards for cars. We published a dossier of the car industry’s aggressive lobbying tactics and unsubstantiated claims as it attempted to derail EU plans for new ‘Euro 7’ rules. In 2020 alone, carmakers spent almost €9 million lobbying in Brussels. In 2021 they had launched a public campaign against Euro 7, falsely stating that the legislation would amount to a ban on the internal combustion engine. The report provides plenty of ammunition to fight off the industry’s attack on clean air rules in 2022.

The electrification of car fleets remains the low-hanging fruit in the race to decarbonise road transport: fleet vehicles account for the majority of sales and kilometers driven. In 2021, T&E followed up on the corporate promises of one such fleet: Uber. The ride-hailing app was far behind on its pledge to electrify half its rides across seven European capitals, T&E’s analysis showed. It served as a reminder to politicians that corporate pledges are not enough; they need to set ambitious targets to ensure that transport providers get to zero emissions. 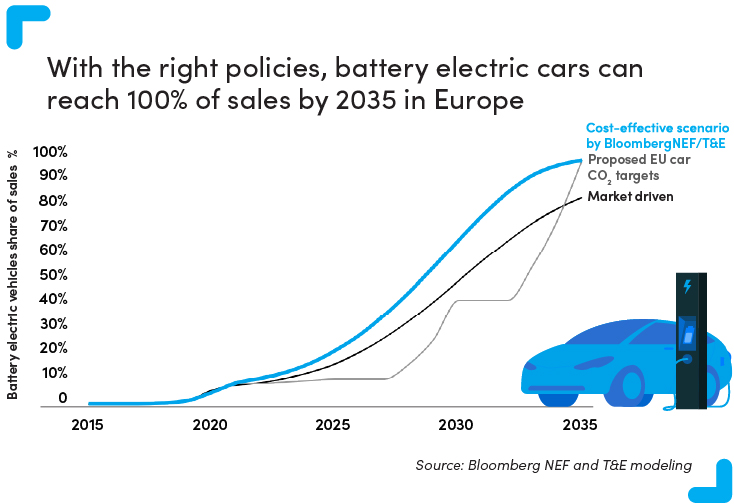