In July 2021, a heavy pile of papers landed on our desks. We were curious: what did the European Commission’s much-awaited Fit for 55 package mean for national climate targets?

The EU is full of jargon. Climate jargon is a niche that only few are familiar with, yet has so much impact on our lives. A term you may hear in the backstreets of the EU quarter in Brussels is Effort Sharing Regulation or ESR. It is the regulation that sets binding national climate targets for the emissions of road transport, buildings, agriculture, waste and small industries. It is a mouthful but a big deal nonetheless: these sectors cover about 57% of the total EU‑27 greenhouse gas emissions.

In its landmark Fit for 55 package, the Commission proposed to increase the EU-wide emission reduction target for the ESR sectors from -30% (compared to 2005) to -40%. A step in the right direction? In theory, yes, in practice, no. The targets appeared more stringent on paper than in reality.

Upon scrutiny, it was clear that the jump from 30% to 40% in the ESR sectors was more rhetoric than real action. All the old loopholes that allowed countries to escape their climate responsibilities remained and there were still no fines for missing the targets.

T&E analysis found that the emissions reduction trajectory sets a far too generous emissions budget for 2021-2030. Weaknesses in the ESR mean that, by 2030, emissions in the ESR sectors risk not being cut by -40%, as envisaged by Fit for 55, but by a mere -33%. The ESR is full of flexibilities and loopholes and member states have an easy way out of their obligations. Unfortunately, the climate does not wait for such opt outs.

An uphill battle remains to be fought.

Voices on the street

Europeans agree with us. Climate action is not for tomorrow, it’s for now. The climate team kicked off the year with the launch of the #EverybodyCounts campaign. In just a few weeks, together with more than 45,000 people, we managed to send a clear signal to the Commission: national climate targets should not be repealed. European countries need to feel the heat, and having national climate targets for the largest emitting sectors, including road transport, is the way to ensure that mitigation measures are supported both in Brussels and in national capitals.

The success of our campaign was confirmed further when we published our poll that showed that 68% of citizens who expressed an opinion want their country’s climate targets to be increased, while 84% support increased climate efforts in the transport and buildings sectors to be delivered through new standards and regulations. What are European legislators waiting for?

Can the transition be socially fair?

Another landmark in the Fit for 55 package was the proposal for a new carbon price for road transport and buildings, the so-called “ETS2”. What would this mean in practice? Fuel suppliers would need to buy pollution permits for each liter of fuel they put on the market, leading to an EU-wide carbon price for transport and heating fuels. The ETS2 would gradually reduce demand for petrol and gas, while its revenues would be invested in clean alternatives and those households most in need.

Many voices in Brussels and beyond touted the ETS2 as THE way to decarbonise transport. Markets will deliver, they said. The prevailing thought was that, if markets deliver, CO2 standards and national targets become superfluous. T&E’s priority was to ensure that those risks didn’t materialise under any circumstance, which explains our cautious approach throughout 2020 and early 2021.

However, as often happens in politics, circumstances change. By the time the spring started, it became apparent that national targets would be kept in place and the phase-out of combustion engine cars was within reach. Thanks to the pressure exerted by T&E and many others, by talking to policy-makers and putting facts on the table, T&E’s ideas, once deemed far-fetched, were blooming.

When the Fit for 55 package was finally released in July, T&E welcomed it. T&E and the rest of the environmental movement have, for decades, supported the ‘polluter pays’ principle. If we had achieved the combustion engine phase-out and the strengthening of national climate targets, how could we oppose making fossil fuels more expensive?

The new carbon price for road transport and buildings came together with a new Social Climate Fund. Part of the revenues generated by the carbon price would be used to help the most vulnerable in the energy transition.

We then engaged in long conversations with our members and partners, to develop a set of criteria that would guarantee that the carbon price and the social fund are socially fair and environmentally sound. Without bringing lower-income households along, the green transition will be almost impossible. Policymakers need to ensure that no one is left behind. 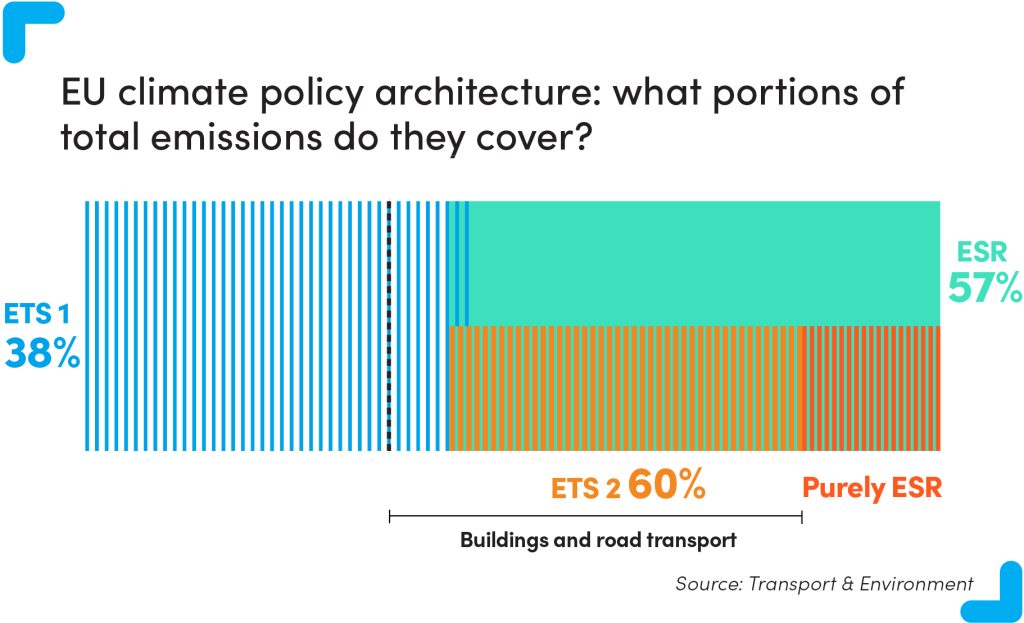