At the start of the year, few imagined that electric trucks could play a dominant role in logistics. The European Commission’s transport strategy foresaw a mere 1% of zero-emission trucks on our roads in 2030.

Things started to change early on. The year had barely started when a wave of unexpected commitments was made by the biggest manufacturers. Leading the way, Scania announced in January that half of its truck sales would be zero-emission in 2030. It would eventually be followed by MAN, Volvo and last and most ambitiously Daimler, who all committed to making around half of all truck sales zero-emission in only nine years. For the first time, NGOs, like T&E, and truckmakers were heading towards a similar goal: away from polluting fossil fuels and towards zero-emission vehicles.

T&E teams up with truckmakers

This created the perfect conditions for T&E and ACEA – the European car and truckmakers federation – to join forces and urge the Commission to update its obsolete vision on zero emission trucks.

T&E engaged in a host of discussions with ACEA to find common ground. In April, we sent a joint letter with the truckmakers to the Commission asking for an ambitious target for electric truck charging infrastructure. In this unexpected alliance, T&E and ACEA developed a common way of calculating the number of public and semi-public chargers needed in 2025 and 2030.

The unsuspected allies were successful: the Commission’s draft infrastructure law and our T&E-ACEA joint letter presented many similarities, including targets for an EU-wide trucks charging network as soon as 2025. This was a symbolic moment: for the first time, the European Commission was signaling that the future of trucks is electric. The 2025 charging coverage goal is set right in time for the truckmakers to deliver on their promise to bring long haul electric trucks to production by 2025, leaving the chicken and egg conundrum behind.

T&E exposes the EU for not going fast enough

But progress is still too slow, as T&E’s study in October showed. EU policymakers are lagging behind truckmakers when it comes to CO2 emissions, meaning truckmakers can already achieve the EU’s 2025 CO2 reduction target while producing just a few zero-emission vehicles.

That truckmakers are going green quicker than policymakers is absurd. The industry is clearly able to decarbonise quicker. It’s time to make them.

The slow move away from fossil fuels is not just a problem for the climate; it is terrible for human health.

On-road testing by T&E shows that even some of the newest trucks on Europe’s roads are exceeding the EU’s legal emission limits. Emissions when driving in towns or cities were particularly alarming, with highly toxic nitrogen oxide (NOx) emissions at least double the legal limits. 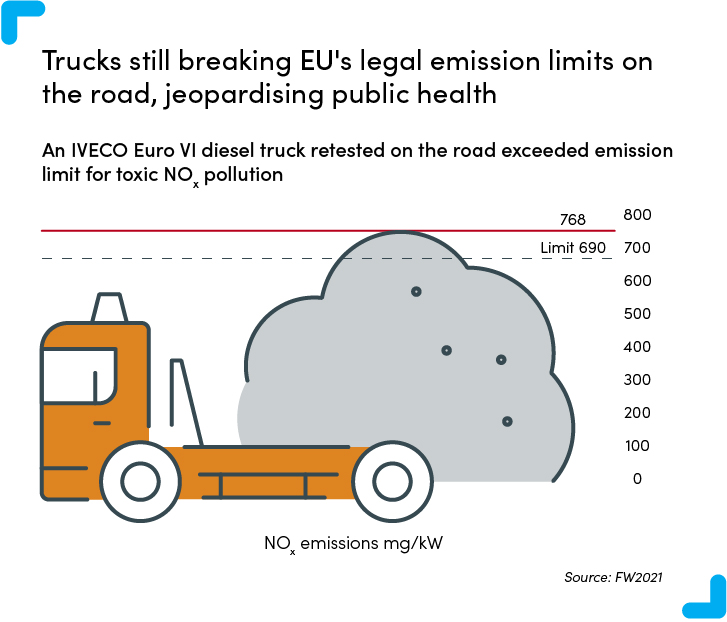 Gas trucks not the answer either

Trucks powered by liquified natural gas (LNG) are no better for the climate than conventional diesel trucks and pollute the air far more than manufacturers claim, T&E testing revealed. For this reason, gas fuelling stations should be kicked out of EU fuel infrastructure targets and European governments should end generous subsidies for LNG trucks.

In the vans segment, T&E exposed the slow progress towards zero emissions. The emissions of new vans have not decreased in three years due to weak CO2 targets, showing that EU emissions rules are so weak most vanmakers are able to meet them without selling a single zero-emissions vehicle. With home deliveries on the rise, vans are the EU’s fastest growing source of road transport emissions.