When the long-awaited Fit for 55 package landed on everyone’s desks in July 2021, we were quick to skip to the aviation chapter. Had European policy makers finally decided to take one of the bloc’s biggest emitters seriously?

Fit for 55: A three-part answer

First, the package looked at aviation’s hoped for savior climate solution: sustainable aviation fuels (SAFs). The ReFuelEU proposal requires fuel suppliers to blend an increasing amount of SAFs into existing jet fuel. Whilst ReFuelEU went some way towards selecting the right types of SAFs, we saw the need to further accelerate investments towards e-kerosene – the only fuel that can be sustainably scaled up to reduce aviation’s climate problem. The proposal asked all airlines departing from EU airports to uplift their fuel prior to departure – a detail of crucial importance that makes sure airlines don’t bypass the measure by refueling elsewhere.

Second, we reviewed a proposal that promised a cap on aviation’s emissions. The EU’s flagship carbon market (the EU ETS) places an increasingly strict carbon pricing on the polluting sectors it covers.  While the July proposal included some important reforms, it continues to exclude the bulk of aviation emissions – the more than 60% of emissions which take place on extra-EU flights. We continue to argue and advocate for this provision to be extended.

The last leg of the Fit for 55 package was to be found in the Energy Taxation Directive – a proposal to tax aviation fuels. For decades motorists have paid taxes on petrol and diesel while airlines burned fuel, tax free. The Commission decided to put an end to aviation’s tax privileges, but the proposal fell short of its goal. Only flights within Europe were to be taxed. How could it so unfairly penalize families filling up their car for a staycation while frequent flyers and business class travelers flying long haul pay nothing? 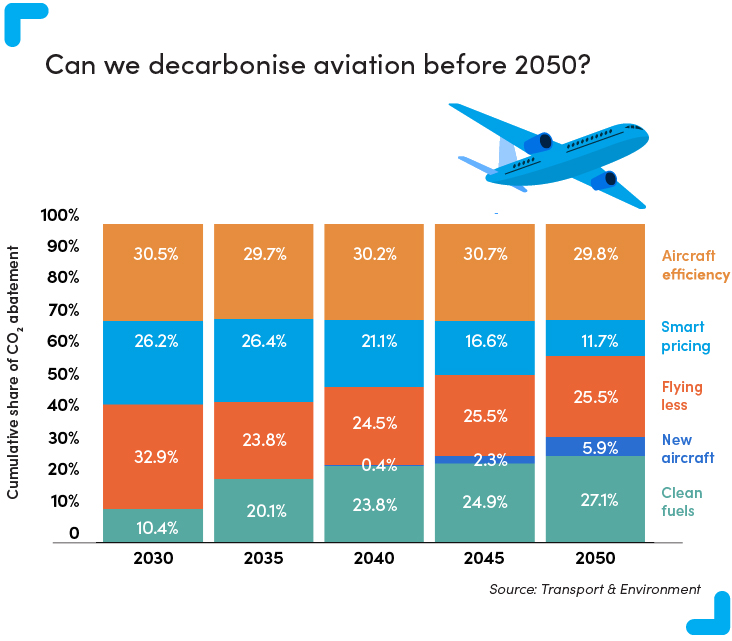 Non-CO2 effects account for two thirds of aviation’s total climate impact. Despite a European Commission report proposing mitigation measures to reduce these effects, none of them made it into the Fit for 55 package. Solutions exist. An easy place to start is to mandate cleaner fossil jet fuel, with fewer contrail-forming particles. We can also reroute flights to avoid atmospheric conditions that create climate heating contrails. These are changes that can be made now, with immediate benefits. Undeterred, T&E is building a coalition of regulators and forward-thinking industry players who are prepared to take action on this incredible source of planetary warming.

Have we lost hope in international bodies?

At COP26, the UK led an international climate ambition declaration for aviation signed by the UK, France, the US and others. It recognised that the number of global air passengers and cargo is expected to increase significantly over the next few decades.

But, in relying on the UN’s International Civil Aviation Organization (ICAO) and its failed CORSIA offsetting scheme, the signatories made the same mistakes as previous efforts to tackle aviation emissions. Our investigation earlier in 2021 showed that CORSIA is the worst option for the climate and can’t be used to regulate emissions on extra-EU flights. It is a cheap offsetting scheme that continues to allow aviation emissions to grow.

Vague pledges and unreliable schemes will not help tackle aviation’s climate problem. The path forward lies with a strong European climate package and a more ambitious ETS and ReFuelEU.

The fight against aviation’s biggest barriers to climate action – airports, private jets and airlines – continued in 2021.

In September, as many Europeans were flying back from a well-deserved break in the sun, we focused attention on the true extent of aviation emissions with our new airport tracker. The scale of the problem was more clear than ever. Passenger flights departing Europe’s 5 biggest airports emit 53 million tons of CO2 – the same as the entire Swedish economy.

But we found worse still: the super-rich that jet set across the world on private jets. Our report found that these jets are 10 times more carbon intensive than airlines on average, and 50 times more polluting than trains. But could private jet owners be part of the solution? By paying for the development of greener technology that can help accelerate innovation and clean flying for everyone, we think the answer is “yes”.

Should we still fly or do we stick to the comforts and discomforts of Zoom? The benefits of minimising business travel – the real delinquent of aviation emissions – especially when it’s by air, are clear. Whilst we work to scale up the clean technologies to save us from aviation’s climate problem, the best thing we can do for now is fly less.