Nearly half of the UCO supplied to the UK last year came from China (244m tonnes) while more came from Malaysia (49m tonnes) alone than was supplied by UK households and businesses. Amendments to the Renewable Transport Fuels Obligation – which regulates the supply of renewable transport fuels – propose that biofuel added to petrol and diesel should rise by nearly 15% next year. The proposed increase has been rushed out ahead of the Decarbonisation of Transport Plan and proposals to increase the use of sustainable aviation biofuels.

Greg Archer, UK Director at T&E, said: “The UK’s increasing thirst for used cooking oil to power transport is 15 times more than can be supplied from British deep fat fryers. This leaves us reliant on used oil being shipped from the other side of the world. Countries that would use UCO for animal feed and other products are exporting to the UK and using cheap oil, like palm, at home. The UK government should scrap its plan to push up demand for biofuels, including UCO, to avoid fuelling deforestation.” 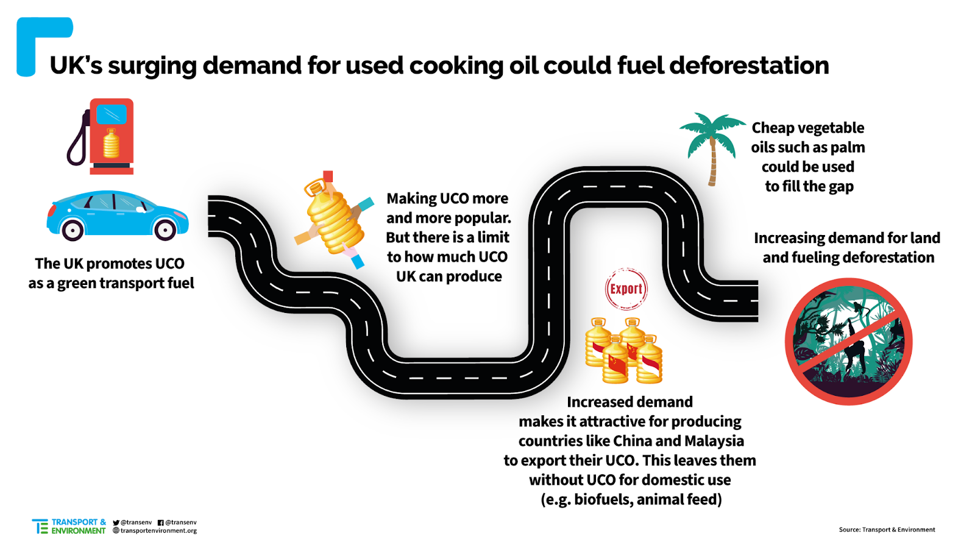 The UK can increase the amount of UCO that can be sourced locally, says T&E, but as its study shows, this is limited by both the capacity of local authorities to collect it and how much used cooking oil Europeans can produce.

In the UK Renewable Transport Fuels Obligation UCO will be counted double towards national climate targets. This means UCO is often traded at a higher price than virgin oil which increases the risk that virgin oils are fraudulently mixed with imported used oil. The EU Court of Auditors has said that voluntary schemes cannot guarantee that all the UCO imported into Europe, including the UK, is actually ‘used’. In the past few years there have been a number of allegations of fraudulent practices linked to the UCO biodiesel industry. The UK has yet to show how it can ensure full transparency of used cooking oil.

Greg Archer concluded: “At this moment we cannot be certain that used cooking oil is actually used. We therefore need to be careful of relying on dubious imports from countries like Malaysia that are huge producers of palm oil. For the waste oil that it does import, the UK should strengthen its verification and monitoring requirements along the supply chain and do regular checks to make sure it is really a waste product. Otherwise we will end up doing more harm than good.”

Palm oil production is one of the key drivers of deforestation in Southeast Asia and increasingly in South America. The UK’s supply of biofuels is regulated through the Renewable Transport Fuels Obligation and fossil fuel suppliers are required to supply nearly 10% renewable transport fuels. The Department for Transport is currently consulting on increasing these biofuels targets. Much of this additional renewable fuel is expected to be met with biodiesel including UCO.