The analysis uses information based upon carmakers own forecasts obtained from the authoritative data provider IHS. It forecasts the number of electric cars that will be manufactured across Europe (including the UK) until 2033. The analysis shows that by 2030 half the cars made in Europe will be battery electric but in the UK just a quarter of the cars made here will be. Total car production in the UK is forecast to be 1 million vehicles, a drop of a quarter compared to pre-pandemic production. 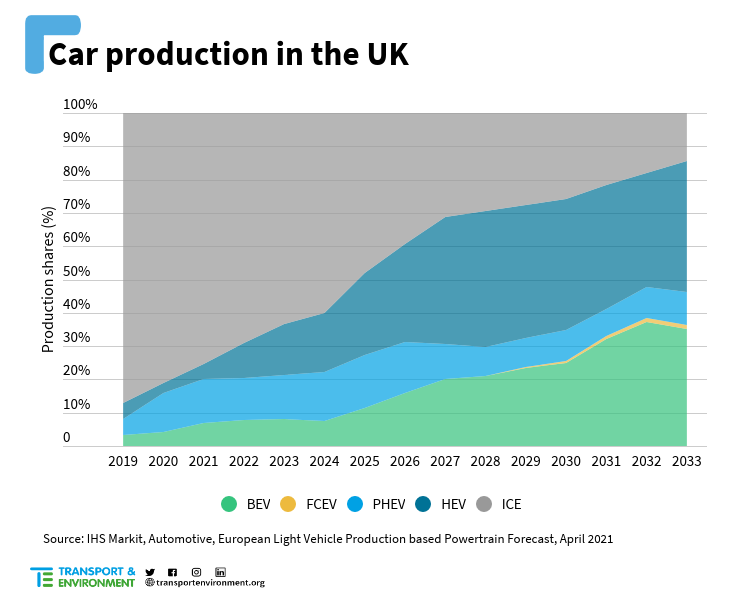 By 2030, the UK is forecast to have the lowest per capita production of battery electric cars of major car producing countries – lower than even Italy. By 2030: half or more of the cars made in Germany, Spain and France will be battery electric.

UK Director of Transport and Environment, Greg Archer said: “The UK will be among the first countries in Europe to end the sale of new cars with a combustion engine, but these will be overwhelmingly imported without companies investing here. UK car industry dinosaurs will be extinct within a decade unless they invest in new battery manufacturing and convert existing production to electric models.”

T&E has analysed the readiness of different carmakers to make the shift to electric models and concluded that UK car producers are among the least prepared. Toyota has slipped from the leading green car company 10 years ago to being the least prepared for the electrification revolution that is underway. It plans to continue to produce hybrid cars at its Derby factory, a 25 year old outdated technology. Jaguar LandRover is the second least prepared company for the shift to electric cars and last year was fined for missing CO2 reduction targets.  BMW, which owns and builds Minis in Oxford is the third least prepared. Stellantis, which owns Vauxhall, is better prepared to transition to electric cars but is focusing new electric car production in EU countries.

Once a leader in battery electric cars, Nissan plans only modest growth in battery electric car production at its Sunderland plant. While discussions are underway to extend battery manufacturing in Teesside, the 6.5GWh of cell production initially planned is a tiny fraction of the 474GWH of production at 17 sites across Europe for which funding has already been secured. A further 10 gigafactory projects (including BritishVolt) have been announced, which would take total cell production to over 1000GWh. But these projects are unlikely to go ahead unless there are stronger regulations in the UK and EU to phase out cars with engines.

Greg Archer added, “The Government must show the UK car industry it is serious about ending the sales of cars with engines by announcing a delivery plan to go with its commitments. We need carmakers to progressively increase sales of zero emission cars until 2035 and to fine those who fail to make adequate progress. Without strong pressure to change, and investment support, the UK car industry will wither away.”

In 2020 the Government announced its plans to end the sale of conventional cars by 2030 and only permit the sale of zero emission vehicles from 2035. But following the announcement there has been no progress with a delivery plan to achieving the targets including stronger regulations on carmakers. The Department for Transport consulted on its Decarbonisation of Transport Plan in Spring 2020 is yet to announce the outcome.