The survey, with supporting analysis by transport think-tank Transport & Environment, finds that reallocating road space (as one of the measure to control air pollution) to create more room for pedestrians is supported by 73% of respondents (just 10% opposed). Additional cycle lanes are supported by 58% (23% against), with more support in younger age groups, and additional bus lanes are supported by 60% (20% against). The introduction of Zero Emission Zones that ban polluting cars from cities receives support from 66% of respondents with opposition from just 17%. 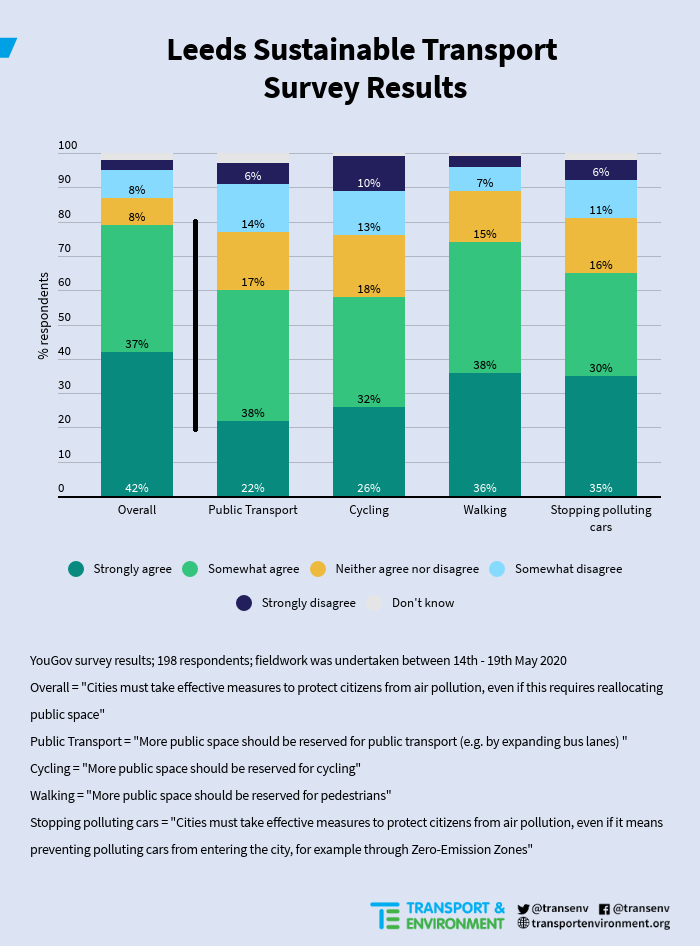 Greg Archer, UK Director of Transport & Environment said, “Leeds residents have appreciated the cleaner air and quieter streets during the lockdown and recognise Leeds with fewer cars is a better place to live. The survey shows strong support for cities to ban polluting cars, speed up bus trips and provide safe routes to walk and cycle.”

The survey also finds that, since lockdown began, there has been a surge in interest to buy battery electric cars. In total 29% say their interest has increased, 22% saying “increased a little”, while a further 7% say “increased a lot”.

Greg Archer added, “The Coronavirus tragedy has also shown breathing choking car fumes is not inevitable in Leeds. More people now want to walk, cycle and drive pollution-free cars, and – once buses and trains are safe – passengers will be happy to use them again. Public attitudes have changed and political leaders need to listen. We need the Leeds low emissions zone introduced quickly and extended to polluting cars with further investment to restrict car use and support cleaner transport across the city.”

Councillor Lisa Mulherin, Executive Member for Climate Change, Transport and Sustainable Development at Leeds City Council said: “With four out of five Leeds residents supporting measures to reduce car use, these findings support our plans to prioritise walking, cycling and, as public health advice allows, public transport for everyone as part of our city’s ambition for transport.  During the lockdown we have seen pollution levels fall due to the quieter roads and Leeds residents now breathe air that is significantly cleaner. As the Government begins to ease restrictions, it is vital that we preserve as much of these improvements as possible.  Our Covid-19 transport response—with measures to widen pavements for social distancing, introducing active travel neighbourhoods, school streets and temporary ‘pop’ up cycle lanes—will help create a safer space for walking and cycling. The focus must now turn to locking in the benefits of people cycling and walking more often.”