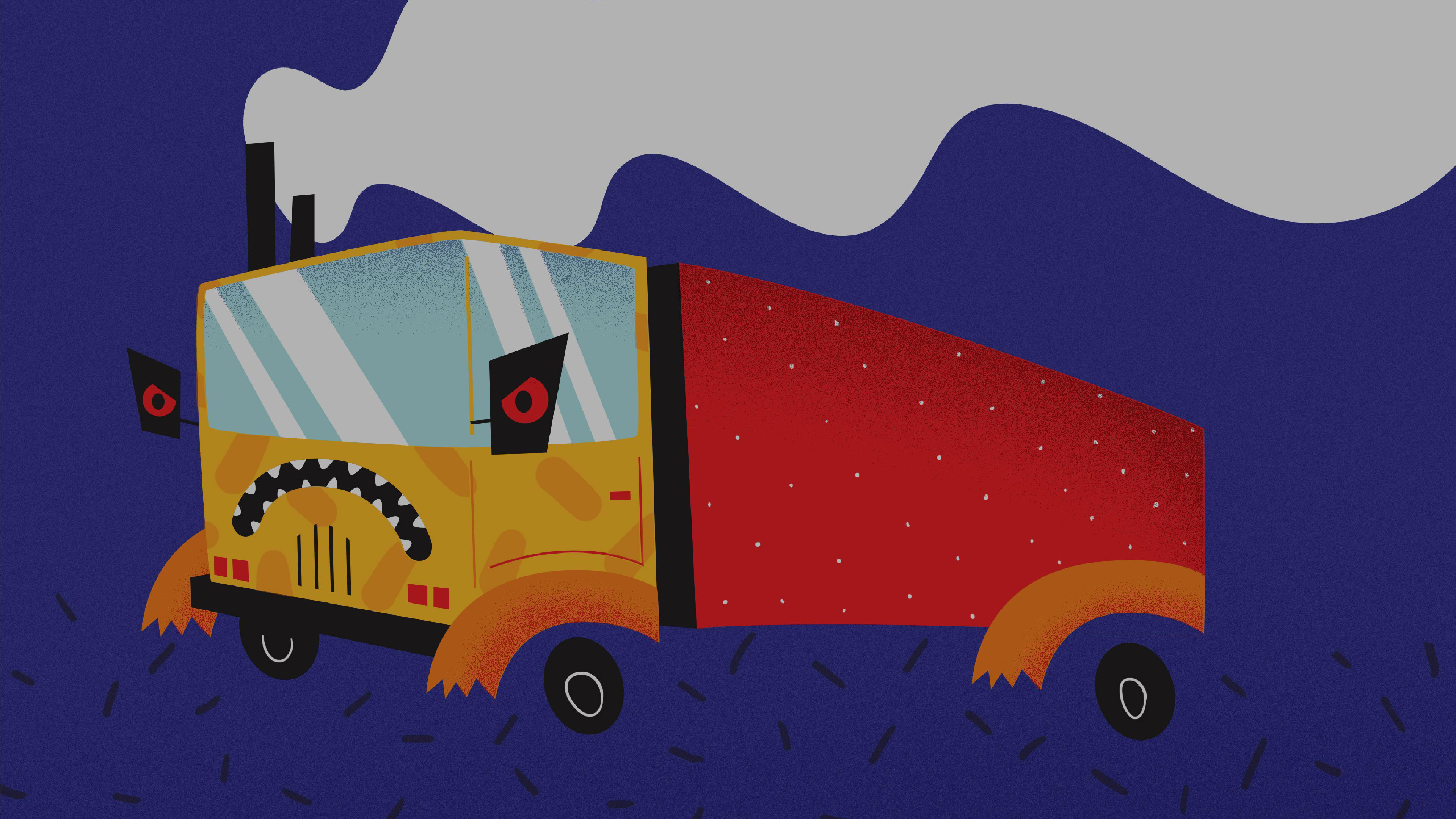 Trucks are the low-hanging fruit in the climate challenge facing European transport. Lorries make up less than 5% of all vehicles on the road while being responsible for 25% of road transport’s carbon emissions. Yet their carbon emissions are not regulated. T&E’s mission in 2016 was to make policymakers see the massive potential for CO2 savings. Who else to help grab weary EU commissioners’ attention than some of the biggest consumer brands and logistics companies on the continent? IKEA, Nestlé, Philips, DB Schenker and Deutsche Post DHL were just some of the big names that T&E brought together to tell the European Commission that truck CO2 standards would save their companies billions on fuel and lead to cheaper goods as well as protecting the environment and boosting energy independence.

But the Commission needed to be convinced that truck CO2 regulation would fly with governments. So T&E took to the skies! As environment and industry ministers convened on the canals of Amsterdam as guests of the Dutch EU presidency, they couldn’t miss the message on T&E’s heavy-duty balloon: Truck CO2 standards now! Our fliers told them everything they needed to know – in 20 years lorry fuel efficiency had not improved. Meanwhile new design prototypes showed that up to 35% greater efficiency would be possible, saving a haulier €10,000 a year. Truckmakers had no comeback and needed to go back to the 1960s to find a fuel consumption baseline they could beat. At the same time, other regions were taking the lead: the US announced a second phase of truck CO2 standards. China, Japan and Canada had also regulated lorry emissions, giving their truckmaking industries a technological edge while boosting their domestic economies.

There was another albatross hanging over Europe’s truckmakers: they were being investigated for acting as a cartel by fixing prices for and delaying the introduction of new emission technologies for air pollution. Eventually, in July, the cartel fine was announced: €2.93 billion, the biggest in the EU’s history. The truckmakers’ collusion was exposed just in time: later that week the Commission announced that Europe would finally regulate truck CO2. As a first step it would make a proposal on monitoring, reporting and verifying lorry emissions in 2017, with a proposal on CO2 targets set to follow in 2018. This is a huge breakthrough which would never have happened without T&E’s campaigning.

“The EU should still do more to ‘create competition on environmental performance’, said William Todts, a spokesman for campaign group Transport & Environment. ‘Truckmakers have to change, but so do regulators.’” Reuters, 19 July 2016

T&E now has to ensure these regulations happen on time. In September we gained crossparty support from MEPs. Our InconvenientTruck event outside the European Parliament in Strasbourg used software to demonstrate how fuel and CO2 savings were possible. The result was MEPs sending a firm message to the Commission to table an ambitious proposal to reduce carbon emissions from trucks as soon as possible.

Of course, trucks’ impact is not limited to climate. Every year 4,000 people die in truck crashes in Europe. Almost 1,000 of these fatalities, are vulnerable road users, such as cyclists and pedestrians, and happen in urban areas. In 2016 T&E campaigned for the European Commission to introduce the world's first-ever direct vision standard, which would mandate what drivers must be able to see with their own eyes. T&E worked with the prestigious Loughborough Design School in the UK to show the huge difference between well designed trucks - which have virtually no blindspots – and the worst. In some cases the ‘dead angle’ was 1.9 metres, putting cyclists and pedestrians at huge and unnecessary risk.

After the summer we managed to also get cities involved, visiting the cabinet of the internal market commissioner Elżbieta Bieńkowska together with Amsterdam, London and Copenhagen, advocating for better truck safety rules in Europe. The cherry on the cake was our T&E Truck Safety Conference in October having representatives from the European Parliament, Copenhagen, Berlin, Vienna and London speaking with the European Commission in the room. We also parked several truck outside of the venue showing MEPs what is possible and how it should be done. With this event T&E managed to convince EU policy makers that truck safety is a Europe-wide problem and that the EU has a great responsibility but also the power to fix this.

The Commission heeded our calls and announced in its report on the General Safety Regulation that it will introduce a direct vision standard for trucks. The new rules will be proposed as legislation at the beginning of 2018 and would apply to all vehicles sold in the EU.

Meanwhile, on the tracks, MEPs ratified a new plan to inject a dose of fair competition into the railway sector, a small step in the right direction. T&E is now pushing for EU railway policy that is more customer focused – for passengers but also for freight users. We want booking and ticketing to be made easier for passengers with sufficient rights in place to protect people when traveling between countries or on multiple operators. As part of our efforts to see as much freight as possible transported by rail, we have assembled a diverse group of stakeholders of rail freight users and operators. This ‘platform’ is developing solutions to the problems that are holding back modal shift, such as equal access to infrastructure, better infrastructure investments, and leveling the playing field between modes. T&E has been involved in ongoing stakeholder discussions on the implementing act for access to service facilities and the review of the Combined Transport Directive. Both of these will have an impact on the future attractiveness of rail as a means to transport goods in the eyes of the freight user.

The Commission also committed in 2016 that it would review the Eurovignette Directive, which defines the parameters by which trucks can be charged for their use of road infrastructure. The Strategy for Low-Emission Mobility states that the directive will be extended to allow for charging based on CO2 emissions, which is something that we have been campaigning for since 2015. We are now working on achieving a VECTO-based system that allows for further discounts for technologies that are proven to reduce fuel consumption (such as low-rolling resistance tyres and aerodynamic devices). The Commission’s proposal is expected in late May. We will continue to push for this directive to further promote the user/polluter pays principles.

In 2016 the EU also unveiled its biggest weapon in its fight against climate change. The Effort Sharing Regulation will set nationally binding targets for emissions reduction in transport, buildings, agriculture and other sectors by 2030. T&E has been combining our resources with other NGOs active in these sectors to make sure the targets are not undermined by loopholes and flexibilities that countries can take advantage of. Europe cannot be distracted from this challenge: the EU needs to slash its transport emissions by 94% by 2050 to avoid catastrophic 2°C warming, according to a study by the respected Öko-Institut for T&E. The task now is to resist those governments which are already trying to destroy the inadequate target of -30% by 2030.