Skip to content
The electrification of vans is particularly attractive because they are predominantly used by businesses that focus on the total cost of ownership rather than the purchase price. Smaller vans are also mainly used for urban delivery, addressing the air pollution crisis in our cities. But despite the good economics of electric vans, there are currently few of them on European roads – accounting for less than 1% of all new van registrations. This is primarily due to the lack of choice. Today just 10 battery electric van models are on the market in the EU, compared to more than 200 diesel models.

Julia Poliscanova, clean vehicles manager, said: “At least 800,000 small electric vans have the potential to be driven across Europe today at no extra cost of ownership compared to polluting diesel vans. Demand is not the issue here. It’s illustrative that German delivery giant DHL had to start manufacturing their own electric StreetScooter to make up for the lack of proper supply from traditional vanmakers. If the market is not delivering, then for the sake of clean air and climate change, policymakers should require manufacturers to do so via regulation.” 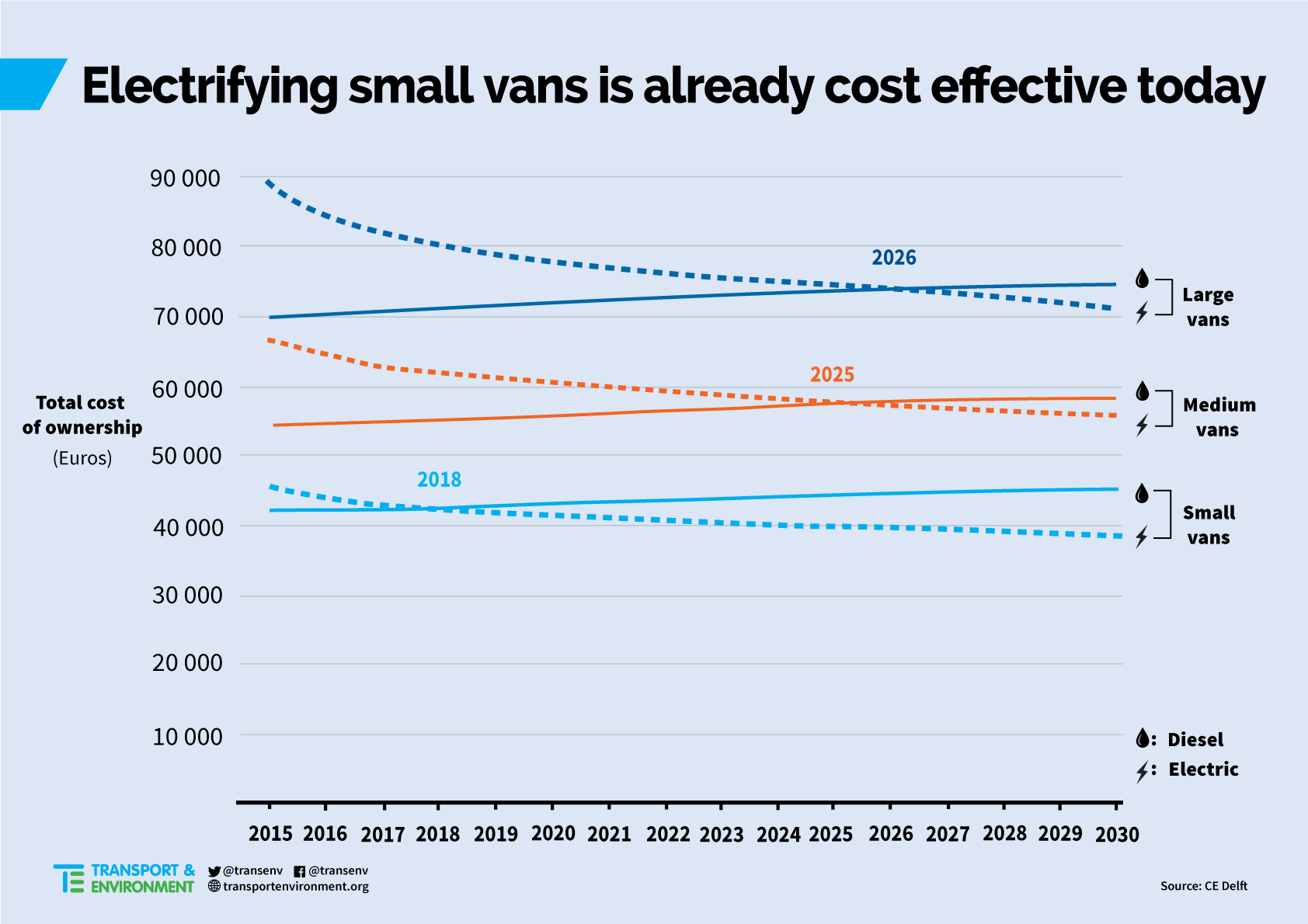 Vans are responsible for 12% of the EU’s total road transport emissions. The current 147 g/km CO2 standard for vans in 2020 is dismally unambitious compared to the 95 g/km target for cars. A target of 113 gCO2/km should have been set for 2020 to require the equivalent cost-effective gains in fuel efficiency. As a result, improvements in van efficiency have been minimal, increasing operational costs for users. The Commission’s recent proposal shows it hasn’t learnt from its past mistakes. It proposes to reduce vans emissions by 15% in 2025 and 30% in 2030 despite its own impact assessment showing that a 40% cut in 2030 is better as vans are used for businesses, running up higher mileage compared to cars.

Julia Poliscanova concluded: “European policymakers, including national politicians, have turned a blind eye to the rising use of vans and its associated pollution. Dirty diesel vans are contributing to transport’s growing CO2 emissions and are making our air poisonous, especially in city centres. It’s time to get vans out of the slow lane and fast track clean-electric alternatives. Europe needs ambitious and robust CO2 standards of 25% reduction in 2025 and at least 40-60% in 2030 coupled with an effective sales target for electric vans to drive appropriate supply. The Eurovignette directive should also be revised so that any toll beginning from 3.5-tonnes vehicles also covers the largest vans on the road.”

Due to laxer regulations compared to their direct competitors, trucks, van usage has been rising since the mid-2000s. Since 2006, the number of kilometres driven by vans has increased by 23% in the UK and by 17% in Belgium. Against this, the use of small trucks has been largely stagnating in recent years. CE Delft identifies a long list of market and social rules for trucks in Europe that don’t apply to vans, distorting the freight market. This has grave social and safety implications [1], as well as a negative environmental impact. The EU must remedy this disparity in the ongoing revision of social rules for the freight market. This would help to level the playing field.