Carmakers will bring to market 92 fully electric models and 118 plug-in hybrid models by 2021, which they need to sell to meet the EU car CO2 target of 95g/km. But in the event of a ‘no deal’ Brexit cars sold in the UK will not count towards the EU target and carmakers will therefore prioritise supplying electric cars in countries where sales help meet their targets.

Greg Archer, UK director at T&E, said: “Thanks to new EU rules, a wave of new, longer range, and more affordable electric cars will be on sale across Europe. But if the UK leaves the EU with no deal it will no longer be part of these rules and the cars sold in the UK won’t count towards meeting the carmakers’ targets. As a result, cars simply won’t be made available in large numbers in the UK, slowing progress in the shift to zero emissions cars here.”

The government consulted on proposals to introduce a UK scheme in 2018 but has not yet released the text of the proposed new UK rules. With the new EU regulations due to start from 1 January 2020 there is almost no time to implement an equivalent UK scheme that requires Parliament approval if the UK exits the EU on 31 October.

T&E also analysed IHS Markit’s forecasts of planned production and found that manufacturing of cars with engines in the UK will decrease by 7% from 2019 to 2025 – but total car production could increase by 11% over the same period due to anticipated production of electric cars and vans. However, the planned production of battery electric and plug-in hybrid cars manufactured in the UK by 2025 (355,000 units) is significantly less than that forecast for France (785,000); Germany (1,591,000); and Spain (510,000). There is also considerable uncertainty over whether planned production will happen in the UK in the event of a ‘no deal’ Brexit. Vauxhall owners Peugeot-Citroën recently warned that future production of the Astra at Ellesmere Port was dependant upon the post-Brexit arrangements.

The analysis also shows there are no new battery factories planned for the UK, but 16 large-scale lithium ion battery cell plants are confirmed or likely to come online in Europe by 2023. Based on data from the EU’s Joint Research Centre, battery manufacturing on this scale will create around 120,000 jobs directly and indirectly in the battery value chain, but the UK appears to be missing out. 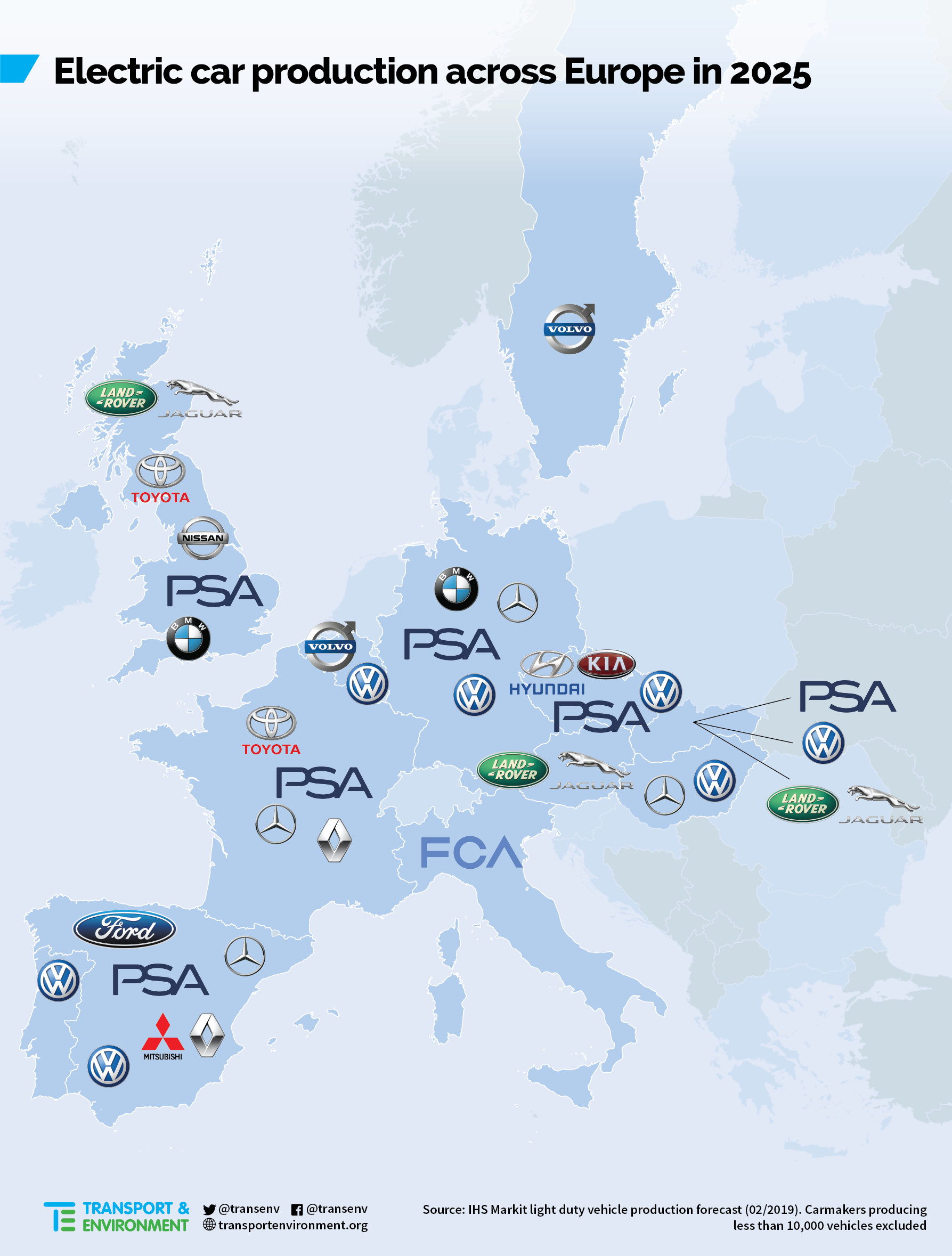 Greg Archer concluded: “Carmakers are investing £130 billion in electrification across the EU but the UK is getting a smaller share than would be anticipated and missing out on the new jobs this will create. It is imperative the UK doesn’t fall behind other EU countries in either sales or production of electric cars and a ‘no deal’ Brexit makes this likely. Across Europe the age of the combustion engine is coming to an end – whether this includes the UK remains to be seen.”