Shipping has not only survived, but also boomed in an era of aviation and high-speed rail largely because of the enormous cost savings it offers companies which transport consumer products and heavy goods. This is largely due to cheap and untaxed maritime fuel and a total lack of climate regulation in the sector. Shipping fuel – heavy fuel oil – is not only the cheapest fuel on the planet, but also the dirtiest one. It emits large quantities of sulphur and other pollutants, as well as greenhouse gases. As a result, shipping is now recognised as one of the dirtiest means of freight transport.

By signing the Paris agreement, the EU committed to ‘economy wide’ decarbonisation efforts; as the only sector that is not yet subject to mandatory CO2 reduction measures in Europe, international shipping stands in the way of the EU fulfilling its Paris commitment. Due to this and the dysfunctionality of the International Maritime Organisation (IMO) in regulating the sector, sea-borne transport is likely to become a big issue for the 2019-2024 term of the European Commission. And with the nominees for the new Commission due to have their hearings over the next couple of weeks, T&E is attempting to force maritime transport’s environmental performance up the EU agenda.

Its study on fossil fuel tax breaks for international shipping in the EU highlights the subsidies ship owners enjoy via tax exemptions. Article 14 of the ETD bans taxation of maritime fuel when sold to ships on EU territory. So, while a tonne of CO2 from a ship makes the same contribution to global warming as a tonne of CO2 from a diesel trucks, the diesel owner pays energy tax while the ship owner avoids it.

Based on marine fuel deliveries and national diesel tax rates in the EU’s 28 member states, T&E has calculated the total unpaid energy tax under the ETD shipping exemption as €24 billion. The biggest beneficiary is the Netherlands with just over €6 billion in lost tax from its approximately 12 million tonnes of maritime fuel sales, followed by Belgium with €4.5 billion Not surprisingly, landlocked countries and those with short coastlines come further down the list. 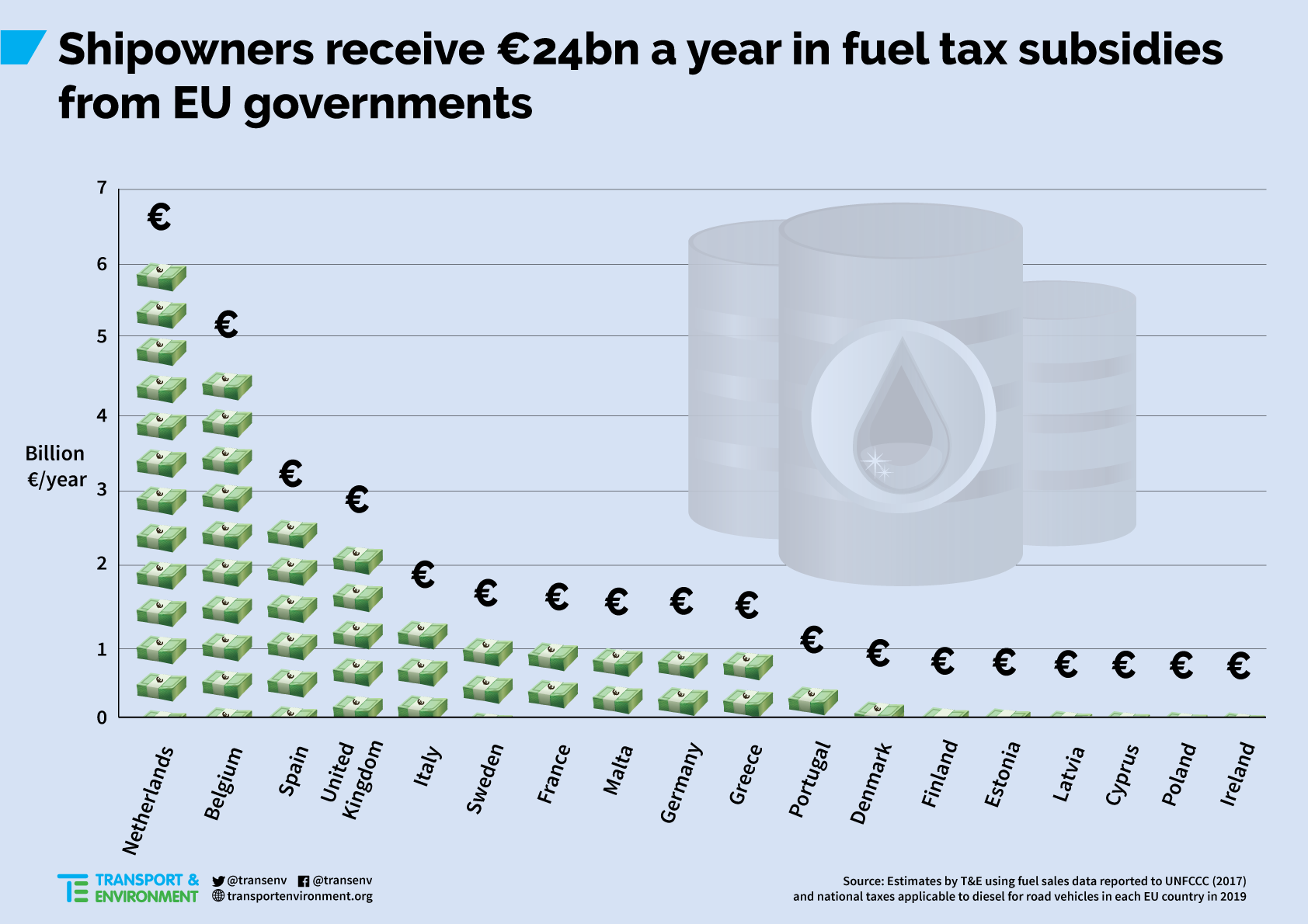 The obvious way to combat these invisible subsidies would be to remove the Article 14 exemption from the ETD, but this would need unanimity among all 28 member states. Also, even if the ban was lifted, it would still be up to individual member states whether tax the marine fuel or not. T&E therefore recommends shipping be included in the EU ETS, which would be easier to achieve as it would only require a majority vote.

T&E’s shipping manager, Faig Abbasov, said: ‘There are no ethical or environmental grounds for treating the shipping industry more leniently than road transport. We believe the right way of removing current subsidies is through emissions trading, and we note that the incoming Commission president Ursula von der Leyen has committed to deliver this. Including shipping in the ETS would generate some €3.6 billion a year with the current ETS CO2 price of €26 per allowance, and a CO2 multiplier could boost revenues still further. Given the EU’s climate commitments, the current situation is not only an anachronism but also a perverse incentive for climate pollution.’

T&E’s study also looks at the likely impact of including shipping in the ETS on the cost of some consumer goods typically transported by sea – bananas, iPads, a kilogram of grain. Even with a €50/tonne charge for CO2 which is passed on to the consumer, the impact on final prices would be less than €0.01 per item.

The EU’s shipping sector is responsible for around 140 million tonnes of CO2 emissions a year, larger than the total national emissions of the bottom 20 EU member states (individually). This figure is expected to grow in coming years.